That’s not my name. But that’s what they call me.

In most circles, that would be viewed as a social faux pas, at best. Relationships usually don’t last when one side can’t get your name right, right?

For many years I was an ‘outsider’ inside my own family. I didn’t speak the Camp language. I didn’t have memorized all the inter-camp, inter-generational relationships. And I never had so many friends who were ‘for real’ friends.

I never went to ‘sleep-away’ camp, but I have been hearing stories from my two sons and my wife for what seems like an eternity. Stories that always reference campers with fantastical nicknames like “George”, “Rughead”, “Orbit”, “Wino”, and many others that I recall and forget all at once.

But on a recent 5-day sojourn hosted by the Admins for the first (and hopefully only) mid-summer Baco Family Weekend – to help the expectant Waiters ’20 ease the pain of their lost summer, the lore of the Baco experience sucked me in like an Adirondack mosquito on a first-year camper. Like all “great” discoveries, it happened quite by accident. I signed up with my son for the tennis tournament and during team introductions, Bruno the tennis instructor announced that “Mr. Freifeld…uhh…Steve… no ahh…Sco…”

But it was too late. Before Bruno could correctly announce my monosyllabic name, the Baco boys in attendance – and some Dad’s too – started chanting “Steve! Steve! Steve!” while pointing rhythmically in my direction.

That was funny enough, but word spread quickly from the tennis courts to the Admin staff and beyond, and by the time we returned to the tables for lunch, everyone simply called me Steve, officially marking the point in time I transitioned from mere humanoid into a full-blown BacoBoy.

I had never experienced going to a place where everybody knows your name (real or the one you came in with). I never experienced going to sleep with your best friends every night, and waking up with them every morning. I never experienced the ritualistic battles that occurred daily on the courts and fields, developing strong competitors, but even stronger friends. Nightly star-showers. Mornings on the lake. Getting lost in nature’s ability to blur the world so you can focus on the moment. And getting to wash, rinse, and repeat that every day for 50 days (or just 5 in my case). 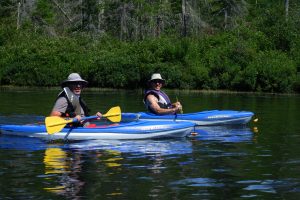 I came to understand the profound power of ‘the magic in the hills’ as I drove down 28N and realized I had already begun missing Camp.

My wife is Strass.

They call ME Steve.