Fun-filled summers where you can play all day.

Camp Baco for Boys and Camp Che-Na-Wah for Girls is camp at its purest. We’re two separate camps built on a single tradition: the secret to great camp is its people. 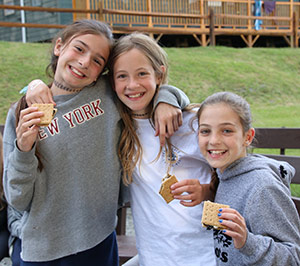 Camp Che-Na-Wah was established in 1923 and Camp Baco in 1951 as family-run camps along the shores of tranquil Lake Balfour in the Adirondack Mountains in upstate New York.

Almost 100 years ago, Sol ‘Chuck’ Amster took a journey to the Adirondacks in search of a serene, beautiful setting, away from the city, where someday he could build a summer camp for children. Together with his new wife, Cornelia ‘Mother Cornell’ Schwartz, Chuck created an environment that encouraged young women to explore the wonders of nature, experience the independence of group living, and excel beyond expectations.

Camp Che-Na-Wah was born, and through the years thousands of girls have spent their summer sitting around a campfire, and making friendships that would last a lifetime. One of those girls was Chuck’s niece, Justice Ruth Bader Ginsburg.

The Amsters soon longed for a boys camp, and in 1951 opened Camp Baco on the south end of the lake.  In 1954, Ruth Wortman, former head waterfront director at Camp Che-Na-Wah, and Mel Wortman, former head counselor of Camp Che-Na-Wah, and a New York City elementary school principal, became partners with the Amsters at Baco, and assumed full ownership after “Mother Cornell’s” passing.

In 1959 a former camper, Alice Sternin, with her husband Lester, became partners with the Amsters at Camp Che-Na-Wah, and in 1961 assumed full ownership. The Sternins sold Camp Che-Na-Wah to the Wortman family in 1986.

Bob, Jerry, and Anita, the Wortman’s three children spent every summer growing up on the shores of Lake Balfour. As adults, they have worked as staff members and Administrators at both camps during the summer, and in the off-season.

Bob brought his wife, Barbara to camp in 1976. Both of their children were raised there.

Barbara Wortman and her daughter, Allison Wortman continue to direct both camps together.

The Wortman family has had the privilege to manage and then own both camps with love and care for generations. We believe that camp at its best is a series of magical moments that emerge from the backdrop that we supply. We provide the unspoiled setting, expert instruction, and careful supervision, the safety and structure for campers. We share the legends, traditions and values that have infused camp spirit from the start. We challenge, teach, nurture and cheer campers on, then we watch them soar.

We are a community that is special among camps. Every year, 95% of our campers return for another spectacular summer; and new campers receive a warm and special welcome. With our team sports, swimming, tennis, the performing arts, and more, at Camps Baco and Che-Na-Wah, campers will have endless opportunities to do what they love and try new things, too!

Our staff’s dedication, compassion and spirit help campers thrive. Our counselors, 80% of whom return each year, take pride in carrying on our traditions.

Where times have changed, Camps Baco and Che-Na-Wah – and what kids get out of camp – remains refreshingly constant: children play all day, learn new skills, challenge themselves, make lots of new friends, explore their own potential and, most importantly, HAVE FUN!