As we head into our new fall routines and rituals, now on the other side of Labor Day, I find myself, as I often do, reflecting nostalgically and longingly, for the sweetest moments of the summer.

This year, I am most moved by the few very special days we spent up on the hills of Lake Balfour with those we love and cherish, at Family Camp.

The fact is, it’s been a difficult year.  Undoubtedly, many have had it much tougher.  We are remarkably fortunate and have many blessings to be thankful for, but it has been a challenge nonetheless.  The hurdles have varied for each of us.  For many, it was tough navigating the winter and spring, kids finding their way through school, activities, and friendships via Zooms and awkward distance hangs.

As time progressed, the possibility of a summer at camp was a beacon of light on which our kids focused their attention–where the confusion, fear, and anxiety of the time, might just be cleansed in the waters of Lake Balfour.

But then, despite everyone’s best efforts, and to no one’s wild surprise, word came that camp was canceled.

What, then, would summer mean?

Is it really summer if there’s no camp?

How would my daughters, Grace and Izzie, heading into their 4th and 2nd summers respectively, manage without time spent at their treasured summer home?

I realize now more than ever that camp is so much more than the several weeks each year our kids spend up in the Minerva hills.  It’s more than the endless stories… nay, legends, that never get old, no matter how many times we tell them to each other or to anyone who will listen.  It’s more than the lake, the bunks, the rituals, the role models, and confidence-building.  It’s even more than the epic ever-lasting friendships that run a lifetime long…longer, and miles deep.

It’s something to look forward to.  Something to lean into when times are tough and dark, when the travails of the off-season have us anxious or down.  Camp is the North Star that shines brighter there than anywhere our travels may take us.  It’s that bright light that we know we can count on to be there, to lift our spirits, to free our care–summer in, summer out.

Camp will be there.

Even for those who may step away for a time–perhaps losing contact with old friends, perhaps a lapse in Bazaar visits on our way through young adulthood–we know, that when we need it, when we aim for a taste of the familiar, when we are old enough to have children of our own, and look to share some of the magic that helped guide our lives, we can always look up, and find our way back to camp.  It will be there.  Waiting for us.  Welcoming.  Warming.

This summer, despite all of the obstacles, all of the challenges, all of the unknowns… Allison and Barbara and the senior leaders at camp, did everything in their power to make sure that camp was there… that at the very least, a little dose would be made available to us… just the medicine we’d need.

I had spoken with my friend and bunkmate Gregg Nadel and his son Josh (who shared a beautiful recounting of his weekend on these pages a few weeks back) on their ride home from the Waiter Bunk Family Camp weekend–the first crew to make the trip.   I was moved by how they spoke of their time there.  They were glowing with feeling, as one can only be after time at camp.  I was immensely happy for my friends, and wrung every detail I could out of them, just as I do my daughters after each summer, just as we do with any friend ready to share a Minerva tale… to enjoy any bit of camp we can, wherever we are, to enrich our days.

I couldn’t help but think that their weekend was extra special because they were Waiters–this summer had extra meaning for them, as they were at that ripe age of teendom when friendships shine the brightest. And for father and son to enjoy that together…well, that’s just untouchable.

I was certain our weekend would be nice too…but surely, it would be a little weird to be up there in a makeshift manner, some friends and bunkmates with us, some not, some traditions, activities, and emotions available, some not.

Nonetheless, my wife Merri and I looked forward to it intently.  Over the years, Merri has come to love camp, the people, and all that it means, as much as I do.  That’s the thing about camp.  Young or old.  Alumni or newbie.  Camp is there for all of us.  All are welcome.  If you love camp, camp loves you.

We knew our kids needed Family Camp.  It would be the centerpiece around which our summer would revolve–managing trips and schedules, meetings and activities around those 4 days up north, and even if it didn’t play out to be all we could have dreamed…even if it were just a watered down version, ‘Camp-Light’…it would still be better than any alternative.

But wouldn’t you know… as it turns out, there’s no such thing as ‘Camp-Light’.

Being up at camp, protected from the world by the surrounding Adirondack hills, awash in the waters of Lake Balfour, endowed by the smiles on kids faces as they accomplished new feats–paddle boarding, crossing the wake on skis, being honored and lowering the flag… we were in it.

We were in it from the moment we stepped foot on the gravel pathways, got our first view of the lake, meandered past Bug’s gym, and were greeted by familiar faces.

We were in it as Rick unveiled ‘The Parfait Blues,’ an instant Friday night Talent Show classic, evidently written earlier that morning, and performed with the one and only Jerry Wortman on keys (yes, keys!!!!).  We were equal parts moved by the super sounds of Jerry’s playing, reflection on the tribute he was paying his brother Bobby who up until this time in our lives was the only Wortman brother we had ever seen or heard play piano, and by the hilarity of Rick’s ingenious lyrics and one-of-a-kind croon:

‘I got the Parfait Blues… Where iiis my granola?

I take a scoop of yogurt…

I take a little fruit…

You know I’m lactose intolerant, so watch out, I might give you a little toot!’

We were in it as Jerry recounted story after story of camp through the years, weaving the old (going back to some of the earliest days, having virtually been born and certainly raised on those hills) with the new, as he cherished seeing our kids enjoying those very hills and carving new stories of their own.  And we were in it when he FaceTimed Ruth from the steps of the canteen, smiling from ear to ear as she regaled us with what other than her famous, Second Hand Rose.  “My turn,” Jerry reminded us as we endeavored to sing along.

We were in it as Baco boys witnessed and learned the meaning of Beauty, Truth, Fortitude and Love from our daughters and friends. 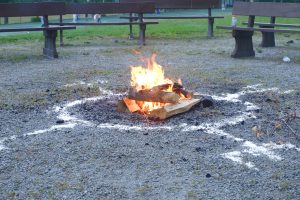 We were in it as new camp doc, Lauren Chernick Fischman and the Che-Na-Wah alumni led sing-alongs to Ratner’s guitar round the campfire, highlighted by 90’s CNW airwaves Indigo Girls classics.

We were in it, playing relay races, enjoying sports, gathering nightly at the council ring, honoring one another, getting better, thanks to the leadership of Barbara, Allison, Greg, Danny, Rick, Mickey, Max, Bruno, Shari, Weinstock, Lenie, and Jane.

We were in it, laying on the far left dock, rooting on the deep-water-test-takers, cheering on the skiers, making fun of each other–bald heads, hairy backs, swatting flies, laughing harder than we’d laughed in months, years maybe.

I was in it when I wandered over to the Waiter Bunk, two-and-a-half days in, in search of a gift left by my bunkmates there a week earlier–a picture of our friend and bunkmate Chip, father of Baco boys Max and Henry Freyman and soon-to-be CNW girl Caroline.  Searching for his picture, newly taped to the back of our 1991 plaque, was just the little scavenger hunt I needed to find and rekindle the love, feelings, and memories of my friend who had passed less than a year earlier.  Time spent reflecting on too many camp friends and leaders lost.

We were in it as DanDan delivered his all-time camp toast on our last night, on behalf of the guys and girls his age who were up at camp serving as counselors that week.  Having originally planned to enjoy their final summer after a lifetime at camp, they capped it off with us, with each other, guiding our much-needed time.

We were in it looking up at the night sky, spotting Jupiter and Saturn, thanks to Matt Lazarus and his handy-duty night-sky app.  Dubbed MVP of the weekend, Laz, not an alum, but every bit a lover of camp as the rest of us, he cherished seeing his daughter Minnie be her best self on those hills, on that stage, amidst great friends, contributing to all of the laughter at every turn.

We were in it among too many stories to recount…the Raskin’s landmark performance of Camp Baco sung to the tune of Gaga’s Shallow, camper-rabbi Tweety seamlessly leading services and the congregation singing along… shouts of “No They Don’t!”   Huge knowing smiles from all in attendance as “He Ate My Socks” and while mumbling through the very same parts of Adon Olam we’ve been mumbling through for decades. Tether Ball, “Counselor” Hoops, flag lowering, Silver’s Taps, Terrace Treats, epic games of Knockout on the courts under the lights…

Looking up, swimming in the deep end of the milky way, lost and found.

“…our own individual version of Happiness, Laughter, Appreciation, and Friendship…together.”
Silver Lining
Camp truly does form connections that never fade