When I stepped off the bus at Baco in 2007 and caught my first whiff of the crisp Adirondack air, I felt a feeling that I couldn’t quite put my finger on. I was a naive 9 year old, had hair down to my shoulders, rec specs, and a massive gap between my two front teeth. 13 summers later, I still can’t really pinpoint that feeling I first felt and still feel to this day.   Similar to how scientists can’t find the answers to the majority of the universe’s questions, I can’t seem to point out exactly what fuels all the magic we feel in this place. So, I decided to do something that we don’t see often around here and opt for a more scientific approach.

I hypothesized that this feeling came from a secret element that only exists at Baco.  We all know this feeling as Baco Pride, but today we’ll label it BP, for science’s sake. You won’t be able to find this element on the periodic table, and scientists won’t ever know it exists. It can’t be cooked up in a lab or viewed under a microscope.  BP is a rare element, one that can only breed under a certain set of conditions.

The first step I took into examining this element was to recall some of the times I’ve felt its energy.

I feel it through Greg’s contagious energy during council ring that makes every evening activity a ‘doozy’.  I feel it in the weird language that we use at Baco, filled with words that don’t exist in the real world like exemption, do-di-do, or hit ‘em off with a pass.  I felt its presence during a rainy-day lip sync contest in 2007 when I sang “Blame Canada” with my bunkmates while wearing only boxers stuffed with socks.  I feel magic in milk call even though I hate milk.  I felt it when the Waiters of 2007 ran out onto the upper field dripping in paint to break my first Olympics. I remember thinking how that was the coolest thing I had ever seen and how all I wanted to do was come back to camp until it was me and my boys running out drenched in paint.  Above all, I found magic in the people I met here and the relationships I’ve forged that will last a lifetime.  You can find magic in anything at Baco.  Maybe it’s in the form of a giant leaf, or in the singular shape of two identical rocks.  Whatever it may be that does it for you, think about that feeling and cherish it.  Hold onto it and never let it go.

Clearly, this element has some strange properties.  Like oxygen, it’s in the air we breathe.  It’s everywhere, and it’s invisible.  But unlike oxygen, you can feel it’s presence in your body.  It’s in the way we feel when our 14s team runs out of bunk 13, it’s in the waiters dressing up like weirdos to scout fun house kid’s basketball abilities, it’s when the bell rings to start the apache relay, and it’s in this moment too, right now.  Another property of this element is its ability to grab hold of our perception of time, warping it, and skewing it, making us believe it’s Wednesday when it’s Sunday, and Week 2 when it’s already Week 7.

The next stage in my approach was to imagine camp, from the lake to the super dome, as one big Petri dish that requires very specific conditions to be met in order for BP to thrive.  The first condition is what I consider the most important – the people, us. Without us here, the element isn’t produced, and camp becomes simply a place again.  It’s the aggregate of our personalities, friendships, inside jokes, and energy that create the only possible conditions for this element to grow. The next condition is our traditions.  Without our history and traditions, this element would never have existed in the first place.    What makes the element truly special, however, is that it has been growing since 1951 when a man named Melvin J. Wortman first harnessed it.  In many ways, BP is the legacy that Mel and Bob have left us.  It represents the evolution of Baco’s magic and an accumulation of a lifetime’s worth of work.  It reminds us of everything Mel and Bob did to get us to where we are now.  From the moment Mel first harnessed it, each generation has built upon the last, each adding something new to the element along the way, from one summer to the next.  It’s weird to think about the future of camp, but knowing how this element has evolved already, I’m not worried.  At all.

But every reaction needs a catalyst, and in order for BP to come to life there needs to be something that stirs the pot and spices things up. That comes from us, the counselor staff.  Working here is the greatest blessing we could ever ask for.  There is no other place on Earth where you can have as much fun as we do in a job as fulfilling as ours is.  It’s our responsibility to continue evolving the magical element for our campers, the same way our counselors did for us.  I love you all, you mean so much to me and to this place.

Thank you for all the work you do outside and inside of camp to keep our Petri dish in those perfect conditions.  And for going out of your way to do anything at all at the drop of a hat.  Without you guys we have nothing.

I will be forever grateful that you gave me the opportunity to be a group leader at this camp. Working closely with all of you has taught me leadership, organization, professionalism and above all how to care for the kids and give them the best summer humanly possible. I’m eternally grateful for the values you’ve instilled in me.

To Wilky, the Big Wave, and the Waiters of 2014 –
There are no words I have for the way I feel about you guys, but the beauty of this place is that I don’t need words because everyone sitting in this ring feels the same indescribable way about their boys too.

So, it’s up to you to decide whether you think my hypothesis is accurate, but I believe it is well beyond a reasonable doubt.  So cheers to all of you, and to the Baco Pride that will remain in these hills forever.  Thank you. 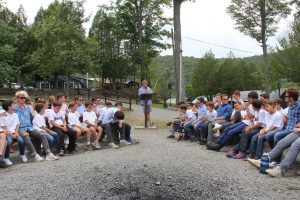